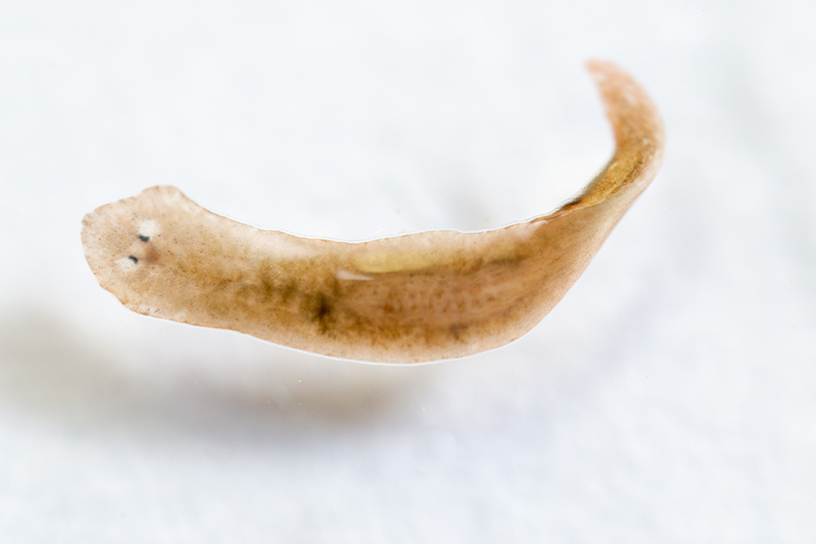 Planarians are part of the Dugesia genus and are a simple animal with bilateral symmetry. Most Planaria are aquatic, but there are some terrestrial species. They reproduce both sexually and asexually. Planaria are acoelomates with three germ layers and are an important model organism in aging research. In this practical, students will work individually or in pairs to examine the anatomy and behaviour of a Planarian.

Observing Planaria Under the Microscope

Task students with labelling the anterior, middle and posterior of the Planaria. The outer layer of tissue, the epidermis is derived from the ectoderm; an embryonic primary tissue layer. A number of the cells contain rhabdites; dark-staining bodies that are secreted to the exterior. These bodies then dissolve to form mucous that coats the body. Epithelial tissue lines the intestinal cavity and pharynx. The gastrodermis is composed of endoderm; another embryonic primary tissue layer. The final primary embryonic tissue layer is the Mesoderm, which is formed by muscle and loose connective tissue (mesenchyme). The mesoderm provides the majority of the tissue between the epidermis and gastrodermis. Neoblasts (also called free cells and formative cells) are found distributed in the loose connective tissue of the mesoderm. These cells have the ability to transform into other cell types and play an active role in regeneration. Rhabdites may also be found in mesoderm cells. Task students with identifying and labelling the following three tissue layers: Epidermis (the outer tissue layer), Gastrodermis (the epithelial tissue lining the intestinal cavity and pharynx) and Mesoderm (the third primary embryonic tissue layer).

A fun and interactive way to illustrate negative phototaxis is to hold a Planaria race. In small groups, students can set up the finish line by drawing a line that divides a petri dish into two equal halves. Ask students to fill the bottom of the dish with a small amount of pond water and then cover half of the dish with a piece of dark paper. After the race track is set up, students can place a few Planaria into the petri dish on the side with no cardboard. By exposing the petri dish to additional light, using a torch the student groups can ‘race’ their Planaria to see who’s worms crawl for cover of darkness the quickest. The winning group is the one who has all of their Planaria under cover.

You may like to cut the end of the plastic pipette at a 45 degree angle to make the opening larger. This will make it easier for students to collect the planaria into the pipette, and will prevent the specimen from getting stuck