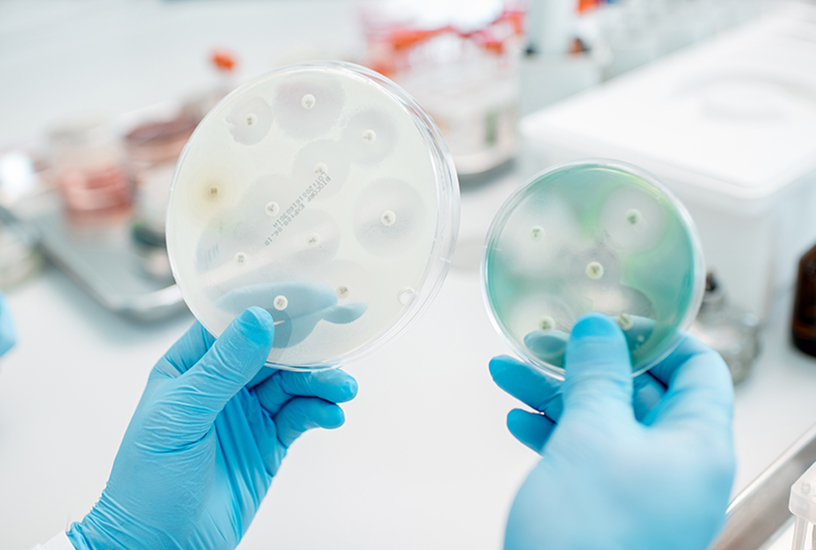 The discovery of Penicillin was a major game-changer for the human race in the twentieth century. With the sudden discovery of antibiotics, we gained a weapon against an invisible enemy. Since that first discovery of Penicillin, many other antibiotics have been developed for use against the broad range of pathogenic microbes; each with their strengths and weaknesses. Unfortunately, this weapon has become blunted from overuse in the past decades; leading to antibiotic resistance.

In this practical, students will investigate a selection of antibiotics and observe the efficacy of each against E. coli. Students will gain experience in aseptic technique. Furthermore, students will have the opportunity to understand susceptibility, resistance and inhibition as the words relate to microbes and antimicrobials. They will also gain an understanding that antibiotics are not universal - one that works against one species of bacteria may not work against another.

After a period of 24 hours, the control plate should have an even lawn of bacteria over the surface, while the experiment plate should show a lawn over most of the plate except for rings around the Ampicillin and Chloramphenicol discs (the zones of inhibition). Included below is a guide of the expected results and diameters.

Ensure your students have a good grounding in aseptic technique. If the vial of bacteria is to be shared around the class rather than aliquoted out, it is particularly important that they each use a fresh sterile pipette for each dip into the culture to reduce the chances that the last groups experiment will be contaminated. Once the plates are inoculated, the lids may be taped down as there will be no need for them to be opened after that point until it is time to sterilise everything at the end.

A great way to extend this practical is to compare various antibiotics against a variety of bacteria. To do this, you can soak blank discs in other antimicrobial liquids such as tea tree oil or bleach or different types of honey (i.e. raw vs pasteurised, or Manuka vs leatherwood) to test their efficacy. Additionally, using Ampicillin Powder, you can make different dilutions using sterile water to identify the most efficient concentration. Carefully label each segment on your plate when using blank discs as the discs themselves will be indistinguishable from each other.

Swabs can be used instead of pipette and spreader to create the microbial lawn; although it is more difficult to get the plate evenly covered. It can be a great way to make your bacterial culture go further if you are on a budget, as this technique generally uses less of the bacteria.

The Exploring Antibiotic Resistance Kit includes:
You will also need: