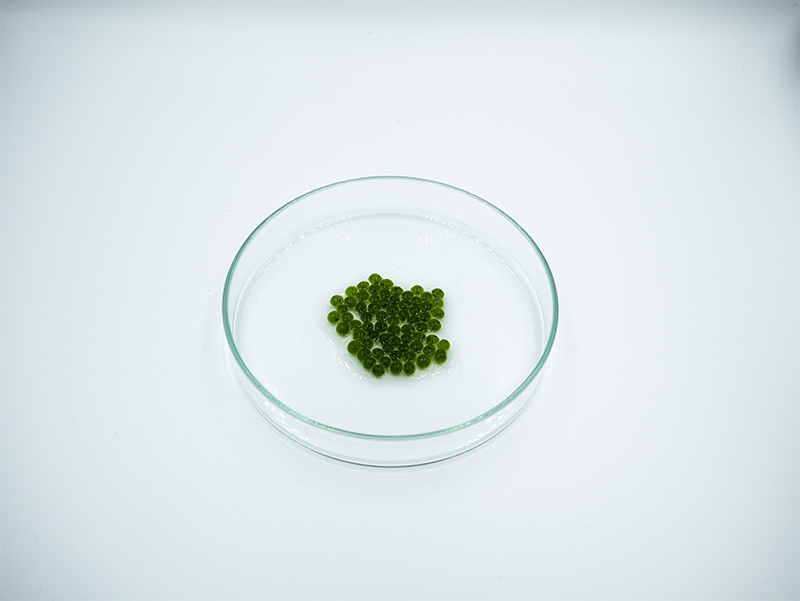 During photosynthesis, radiant energy is converted into organic substances that can be stored within the plant to support growth, reproduction, and metabolism. Plants metabolise the sugars that form as a result of sunlight, carbon dioxide, and water reacting. Reliably studying photosynthesis first hand can be difficult and require precise setting up. Algal ball photosynthesis kits offer an easier, more accurate method of studying photosynthesis that is perfect for use within the classroom. Algal balls are stored in small vials filled with hydrogen carbonate indicator solution. When exposed to light, the encapsulated algae absorb the CO2 from the solution they are stored in during the process of photosynthesis. As a result of the lowered CO2 levels, the pH of the solution will rise. When no light is available, respiration will dominate and the pH will decrease through the release of CO2.  Changes in the levels of carbonic acid can be monitored via the colour changes that occur due to the hydrogen carbonate indicator.

In this practical, students have the opportunity to tangibly observe photosynthesis. They are tasked with conducting a number of small experiments and observing how the colour changes from yellow/orange to purple when the algal balls and solution are placed under a light source as photosynthesis takes up dissolved CO2 and the pH rises. Additionally, students create a light filter to observe its effects. Vials are stored in the dark for a short period to observe the colour change from purple to yellow/orange as respiration occurs and the pH falls. Varying the number of algal balls and light intensity gives students the opportunity to explore the effect on algae. This is a great practical to introduce students to the basic principles of photosynthesis in a fun, simple and interactive way.

Method 3: Varying the Number of Algal Balls per Vial

Exposure to light and dark expected results
After exposing the vial to a light source, the colour in the solution should change from yellow/orange to purple as photosynthesis absorbs the CO2 and the pH rises. After placing the vial in the dark, you should observe the colour in the vial change from purple to yellow/orange as respiration occurs and the pH falls. Respiration and photosynthesis occur simultaneously in the algal cells. As more light becomes available, photosynthesis dominates. However, as conditions become darker, photosynthesis is retarded and respiration takes over as the main process.
Coloured light filter expected results
The pH of vials wrapped red, blue or purple cellophane will experience a greater rise than vials wrapped orange, yellow or green. This is due to the way the algae absorb light - we observe them as green because that is the colour that bounces off them out of the spectrum that makes up white light and so that is the colour that is not used in photosynthesis.

Varying the light intensity
The rate of photosynthesis should increase with proximity to the light source, until it becomes too close and therefore too hot. Whether this happens will depend on your light source and your batch of algal balls. However, there should be a reduction in the time taken for the colour to change for the closer vials compared to the further vials.

You can compare the colour of the indicator solution in your experimental vials to a set of standard vials that contain solutions of boric acid / borax buffers coloured with hydrogen carbonate indicator.

If you are providing students with the already prepared 7mL vials with the algal balls and indicator, it may be a good idea to expose them to light for half an hour or so beforehand to start photosynthesis.