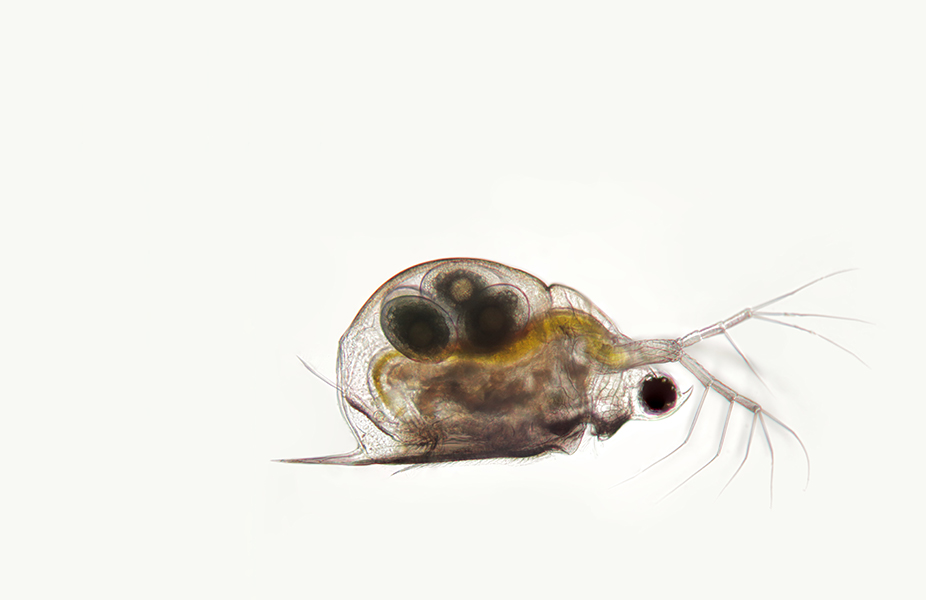 We have found that Daphnia tend to survive best if they are kept cool at around 20°C. It is important that they remain in the water that they came to you in as any transfer, or change, can cause sudden deaths. To achieve the best conditions we recommend that you loosen the lid to allow air into the culture and then either place the container in the coolest place that you have, or suspend the culture in a water bath to try to keep the temperature favourable. Do not place the culture in the fridge.

Daphnia strain microscopic food particles from the water; making them filter feeders. Daphnia cultures thrive when fed an algae food source, and a baker’s (or brewer’s) yeast suspensions.  Yeast suspensions can be prepared by adding spring water to a clean 2 litre plastic bottle and mixing in baker’s yeast until the water becomes slightly opaque and milky. The suspension can be stored in the refrigerator and reused.  Shake the suspension lightly to agitate and re-suspend the yeast. To deliver the food source, add a few drops to the culture container daily. Alternatively, crush 3-4 grains of dry baker’s yeast on clean paper and place on the surface of the water. To encourage bacterial growth, use hard-boiled egg yolk or powdered egg yolk; delivering roughly the same amounts as yeast. Do not overfeed as bacterial overgrowth can lead to oxygen depletion within the culture container.

Many methods have been suggested by biologists for the culture of Daphnia including culturing in duck manure extracts, yeast solutions, and in bacterial suspensions. None of these methods have proved entirely satisfactory in our own laboratory.

Whilst you may try some of the methods mentioned above, we suggest you place the organisms in a small aquarium containing elodea or other aquatic plants. Do not include fish or hydra as these will eat the Daphnia. If you are extremely fortunate the Daphnia may survive and multiply, but this multiplication cycle fluctuates rapidly with organisms appearing in moderate numbers at some times and being non-existent at other times. They are amongst the most difficult of all organisms to maintain in artificial culture in the classroom.

Southern Biological provides living organisms for educational and scientific study. We strongly advise against releasing Daphnia or any other organisms into the environment. In most circumstances, it is illegal to release lab reared organisms (regardless of whether they are indigenous) into the natural environment without a permit. This is to protect native wildlife, environment and ecosystems.

To safely dispose of the culture, add bleach to the container water; allowing it to settle and pour the contents down the drain; followed at least a litre of water.

No Biosafety information needed for this organism.

We’ve received our Daphnia but they are all on the bottom. Are they dead?

It is important to give the Daphnia time to recover from shipping and to begin moving once again. Any debris at the bottom of the culture jar is most likely Daphnia exoskeletons that are shed as the grow.

I poured my Daphnia into an aquarium and they all floated. What went wrong?

Daphnia are able to retain air through an expanded carapace. This can cause them to float and become trapped on the water’s surface when poured suddenly into new waters such as an aquarium.  To add Daphnia to an aquarium safely, gently submerge the open jar in the water and slowly pour out the cultures underwater to release them.

We want to do a project on the heart rate of Daphnia. What should we do?

We recommend using the Daphnia as soon as it is received for heart rate studies, transfer the Daphnia specimen to a cavity slide using a wide mouth pasteur pipette. Use a slowing solution such as Protoslo to assist with Daphnia viewing.

How can I tell the difference between a male and female Daphnia?

Most Daphnia populations contain majority females and with very few to zero males.  Furthermore, when observed under a microscope during breeding season, you will see a dorsal egg sac on Daphnia females.

Is it possible to keep Daphnia in an aquarium with fish?

It is possible but your fish will likely eat them. Aquarium hobbyists are known to culture the organisms in order to feed their fish.

Can I put Daphnia in a refrigerator?

It is not recommended that you place the algae in a refrigerator or expose it to rapid temperature changes. Keep them at room temperature.

We attempted to culture Daphnia. It went well initially, but they all died after several weeks.  What went wrong?

Daphnia populations will occasionally die-off. The majority of the time, females will have left behind eggs. These eggs will then hatch and restart the population. The eggs are likely to be among the debris at the bottom. If planning to maintain a population for an extended period of time, maintain 2 to 3 separate populations to prevent total loss in the case of die-off.