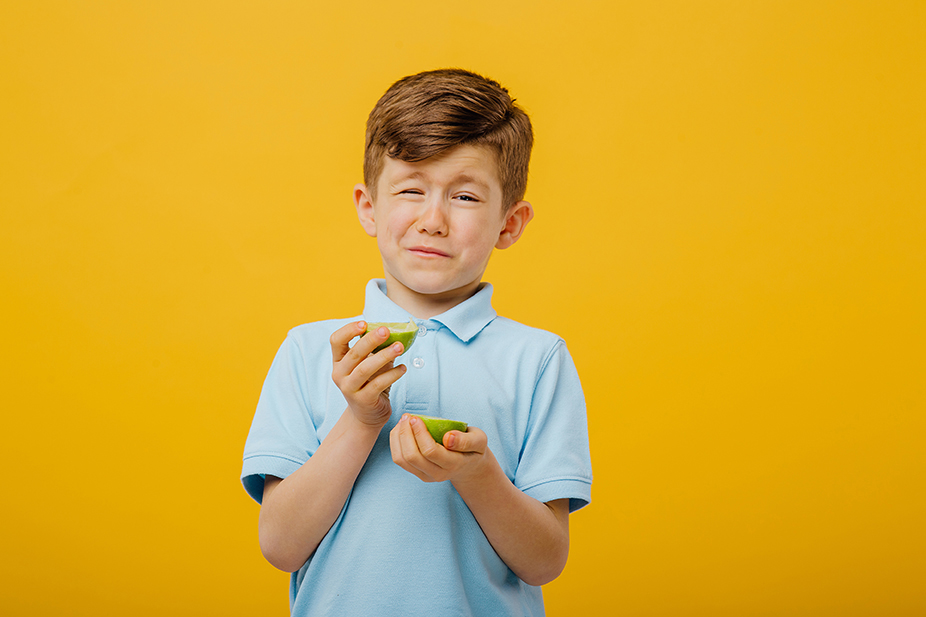 Among different animal species there are large discrepancies in smelling capabilities. For example; dogs are capable of smelling much more of the world than humans. This discrepancy is the result of significant differences between human and dog repertoires of G-protein-coupled receptors (GPCRs). These differences are not only present between species but also within members of the same species. Estimates on the subject suggest that humans generally have 2 different versions (alleles), for approximately 200 of their olfactory receptor (OR) genes; meaning that you are very likely to have different combinations of the OR alleles to another person. These different combinations of alleles result in individuals perceiving and detecting smells in completely different ways.

This can be understood through the excellent example of the smell of fresh cut grass. The chemical cis-3-hexen-1-ol means the smell of fresh-cut grass is strong for individuals with an intact odourant receptor called OR2J3. Two missense mutations that change amino acids in the receptor eliminate the odour. Similarly, a missense mutation in OR5A1 leads to an inability to smell the floral smell in violets and other flowers; β-ionone.

Genetics are not only capable of affecting smell, but also taste. The sense of taste is fundamental to our quality of life and, historically has been integral to our chances of survival. It is common knowledge that mammals are able to identify basic tastes, such as; sweet, sour, bitter, and salty. Somewhat well known is umami, the savoury taste of the amino acid monosodium glutamate (MSG). However, new evidence suggests humans have the ability to discreetly recognise fats, carbonation, and calcium. It appears likely that each taste we are able to detect played a part in the successful survival of the human race. Our ability to detect bitter compounds through taste prevents us from consuming harmful alkaloids found in plants. We are able to taste sweet and fatty foods and generally respond positively to these essential high energy foods. A healthy diet requires salts in small portions, umami flavour naturally derives meat protein, and carbon dioxide results from fermentation. Our ability to taste different flavours appears to have a connection to the foods that the human race has historically needed to thrive.

How taste is affected by GPCRs

Most taste compounds detection and variation in taste receptors amongst species is due to GPCRs. The genes that enable our ability to sense flavours mutate and become inert in animals with varied diets; with the exception of genes function to provide a selective advantage.Many carnivore species, such as cats, are no longer able to taste sweetness as a result of mutations that have made their sweet taste receptor genes inactive. Despite evolving from carnivores, the giant panda no longer has the gene necessary to taste umami. Feeding solely on a diet of blood has lead vampire bats to have almost completely lost their ability to detect sweet, umami, and bitter flavours. It is very common among whales species to have no ability to taste anything other than salt. This may be the result of whales swallowing their food whole. Humans are also affected by the genetic differences in taste receptors. For example; saccharin taste bitter to some individuals due to variation in taste receptors TAS2R43 and TAS2R44. Mutations in TAS1R3 affect the perceived sweetness of sucrose.

The science behind tasters and non-tasters

Studies into genetic difference causing different abilities to taste flavours truly begins with Albert Blakeslee in 1932. At this time he was able to detect genetic differences in people’s ability to taste the bitter compound PTC. Working at Cold Spring Harbor Laboratory, he studied these differences in PTC tasting, and in 1939 was able to measure them in chimpanzees. The findings suggested that humans and chimps inherited the same tasting and non-tasting alleles from a common ancestor. Mathematical geneticist, Raymond Fischer contended that selection for both allele (called balancing selection or heterozygote advantage) maintained both taster and non-taster alleles over millions of years of evolution. By cloning the TAS2R38 receptor in 2003, Dennis Drayna was able to identify three mutations within the gene that correlate strongly with PTC tasting. Stephen Wooding found that 2 different mutations in TAS2R38 reduce PTC sensitivity in chimpanzees In 2006. These findings refuted the hypothesis that human and chimp variation emerged from a common evolutionary origin in 2006. However, there remains strong genetic evidence for balancing selection. Different TAS2R38 alleles are present in higher levels among different human populations. These human mutations are estimated to have occurred earlier in our evolution. Two have been estimated as a million years old; with one even present in Neanderthals. The high prevalence across different populations and their age makes a strong argument that tasting and non-tasting alleles have been sustained via natural selection.

This raises the question of; what advantages do different TAS2R38 alleles offer? It is possible that they exist to allow people to taste different compounds. The non-tasting alleles of many olfactory and taste receptors are the result of stop codons that produce shortened, nonfunctional receptors. However, missense mutations create the non-taster TAS2R38 alleles, which encode receptor proteins with 3 amino acid substitutions. Although non-functional in the detection of PTC, these alleles could potentially bind other taste molecules. PTC non-tasters experience an Indian wild currant, bignay berries as bitter tasting, while PTC tasters do not. This suggests that the non-taster allele is able to respond to a bitter compound present in these berries, while the taster allele is unable.

GPCRs related to taste and smell receptors are integral to various different cell-surface functions and play a role in a number of diseases. Mutations in dopamine receptors are implicated in attention-deficit disorder, depression, and anxiety. Mutations in adrenergic receptors play a role in obesity and asthma. Roughly a third of prescription drugs target GPCRs and therefore polymorphisms in GPCRs have an influence on drug effectiveness and their side effects. Mutations in the β-adrenergic receptor modulate the effects of high blood pressure and heart attack prevention drug, propranolol. This was the first drug to target a GPCR.

Changes in the dopamine receptors will impact the effectiveness of medications used in the treatment of schizophrenia and Parkinson’s disease. Mustains in serotonin receptors can increase side effects in anti-depression and anxiety medications and can result in weight gain or involuntary movements. Many medications produce a bitter taste as a side effect and cause many patients to neglect taking their medications as a result. This is likely the result of drug molecules binding to taste receptors along with the intended target. Taste receptor research is now offering a potential solution to this problem by aiming to block bitterness sensations or ‘tune’ drugs to suit individual taste variations.

The discovery that taste receptors are expressed widely and exhibit extrasensory functions positions the receptors as further candidates for pharmaceutical development. Bitter taste receptors expressed in the lungs that open airways following inhalation of bitter compounds, may lead the way for drug development for asthmatics and other lung disease sufferers. Taste receptors in the upper airway to assist in the detection of compounds produced during bacterial infection. TAS2R38 mutations play a role in increased risk of chronic sinusitis. This is likely the result of defects in sensing Gram-negative bacteria. The human body comprises of taste receptors that recognize different bacteria; whereby antibacterial compounds called beta-defensins are produced as the receptor binds to bacterial compounds. Therefore, sufferers of sinusitis may experience positive effects from inhaling bitter substances.