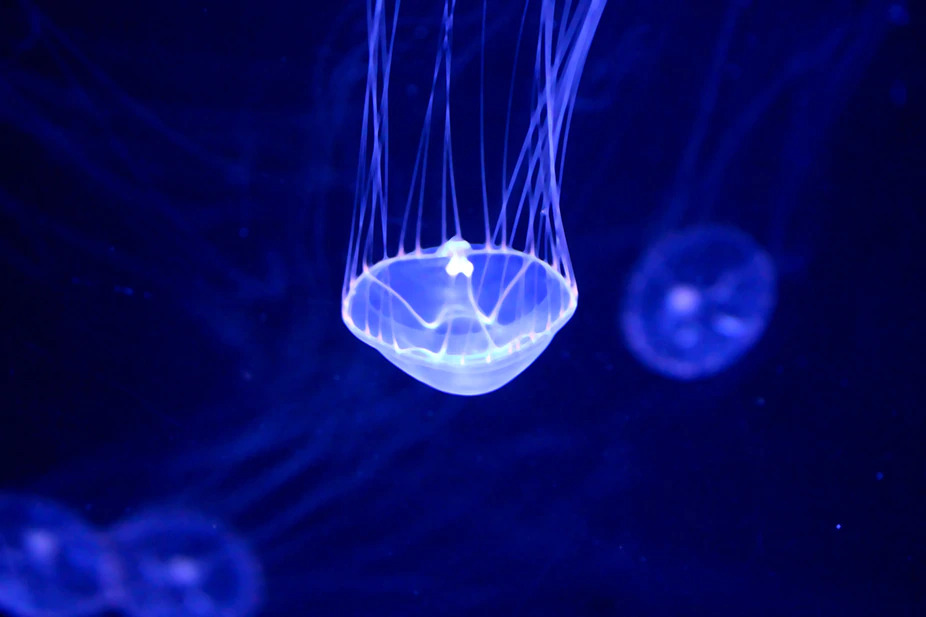 Green fluorescent protein (GFP) is an excellent tool that is used in teaching biotechnology, and genetics. Using this protein, students will be able to create fluorescent green bacteria, relating the experience to news stories such as transgenic animals that glow fluoresce green under ultraviolet (UV) light when the gene for GFP is inserted into their genome. Students will be able to identify other animals that naturally express the GFP protein; glowing green; such as fish readily available at the pet store. Beyond this, students will gain an understanding of the extensive real world scientific applications of GFP.

The discovery and structure of GFP

Aequorea victoria is a jellyfish; known for its luminescence; glowing a fluoresce a yellowish green. Found off the Northwest Coast of the United States, the animal gained significant interest in 1962, when Osamu Shimomura and his colleagues were able to isolate the luminescent substance from the animals. After studying the substance, they were able to determine that it is composed of 2 proteins, aequorin and GFP. GFP has been studied at length since then and it has yielded many interesting findings. In the case of the Aequorea victoria, GFP can be found in granular form with aequorin located on the edges of the jellyfish’s bell. Aequorin releases energy as blue light when it binds calcium ions. Yet, aequorin protein transfers the energy to GFP within the animal rather than emitting blue light. The GFP emits a yellowish green glow as a result of this energy transference. The luminescence of GFP can artificially fluoresce without the aid of  aequorin in a lab setting with the use of blue or near UV light. A barrel-shaped structure composed of 11 beta sheets with an alpha helix in its center is responsible for the fluorescence within this protein.

What about GFP makes it a powerful research tool?

Scientists use GFP and mutated versions to gain a deeper understanding of the functions, attributes and behaviours of cells and organisms. GFP is introduced into cells by inserting its gene into the genome of the cell or organism being studied. GFP has many characteristics that make it suitable to aid in the study of cells and organisms:

Scientists have developed an extensive range of mutated versions of the GFP in order to make it more suited to lab research. The first mutation was conducted to contend with temperature incompatibilities. Many of the cells and organisms that scientists study function at 37° C, however unmutated GFP does not fold well at 37° C. To navigate this issue, scientists altered the protein to ensure it would fold well at 37° C. There have also been mutations made to increase the fluorescence of GFP and develop variants that fluoresce in a variety of colors.

The first use of GFP was as a reporter protein

The GFP gene was used as a reporter gene in the nematode worm, Caenorhabditis elegans during its first use as a research tool. The term ‘reporter gene’ refers to a gene that is employed in the detection of an activated promoter. The reporter gene is placed after the promoter of study and when the promoter is turned on, the reporter protein is produced. With regards to GFP, green fluorescence is the detected protein. GFP does not require any toxic substrates and has a low toxicity to cells, and therefore can be used in the detection of a specific promoter  turned on in living cells and organisms.

Using GFP to localise proteins in a cell

GFP can be deployed to identify the location of a protein within a cell. This can be achieved through the creation of a fusion protein; a protein that contains GFP as well as the protein of study. During this procedure, the gene for GFP is fused to the gene for the protein of interest, and then inserted into the genome of the cell or organism relevant to the study. GFP is not known to interfere with the folding of proteins or partial protein amino acid sequences it has been fused to. When fused to a protein, GFP also shows no signs of interfering with the protein's regular functionality or movement. To localise and detect the protein the GFP is fused to, the cells can be illuminated with a relevant light wavelength under a microscope. The correct light wavelength will cause the GFP fusion protein in the cells to fluoresce. The position of the protein within a cell will be evident in spots of bright fluorescent green; or another colour in the case of a mutated GFP. The relationship between the 2 proteins can also be determined using a very similar technique. To do this, two different coloured GFP are fused respectively to 2 proteins to illuminate them within the cell; so that they may be identified separately.  The advantage of GFP over older techniques used for localising specific proteins is that GFP allows the cells to be kept alive throughout the length of the experiment. This means that the movement of the proteins may be tracked over an extended period of time. Past studies to identify the location of proteins used antibodies that were specific to the protein(s) of interest and linked to traditional fluorescent molecules not coded for by genes. This method results in the antibodies killing the cells; not allowing for further study.

Scientists studying signaling pathways cells are increasingly using GFP and variants to sense their environment and respond to what they sense. Various external and internal stimuli causes the proteins and molecules to respond in different ways.  Scientists are able to gain a greater understanding of cell functionality through the study of these interactions; in many cases facilitating drug development. Some interactions between proteins in these pathways are rapid; making them difficult to study. Fluorescence resonance energy transfer (FRET) is a technique employed in the detection of close interaction between 2 molecules. The FRET technique requires for the proteins whose interaction is being studied to be labelled using a different coloured fluorescent molecule. The fluorescent molecules interact with each other. when the proteins reach close proximity, altering the fluorescence of each, so that it may be measured.

GFP as a sensor

Cell biology studies frequently involve the detection of the pH or pH change in an organelle or specific location in a cell. GFP molecules can be adapted to function as sensors. Mutated GFP molecules have been developed to alter the wavelength that they maximally absorb at or that cease to fluoresce in response to specific pH changes. By linking the specifically mutated GFP to a specific protein sequence that targets a specific location in the cell, the fused protein can detect pH levels. Indicator molecules were used in the past to detect pH and pH changes; however they were frequently toxic to the cell. The methods of the past to place molecules within the cells were invasive and disruptive, making it difficult to maintain regular cell function. A gene expressing GFP and GFP fusion protein does not require any cofactors once introduced into the cell. Therefore, invasive procedures to introduce additional molecules into the cell are not required, leading to more accurate and user friendly experiments.

GFP has facilitated and brought great advantage to the study of organism development. The majority of development occurs through cell migration to their final location in the organism. Scientists previously studied cell migration by examining nonliving embryos or cross sections of embryos during various developmental stages. Using this method, scientists were able to determine major events by studying their order of occurrence. To some extent, tracking development in live organisms has been made possible with advances in microscopy. These methods track a cells location within an organism, by tagging them. GFP represents a highly effective tracking protein and can be used by introducing the gene coding for GFP or a GFP fusion protein into the organism’s genome.The choice of promoter used to express the gene can be used to determine the cell type GFP or GFP fusion protein is expressed in. Location changes in the cells within an organism can subsequently be tracked by observing the location of the fluorescence over time.

GFP is deployed in the study of cancer metastasis. In these studies, the gene for GFP is placed into lab cultured cancer cells. The cancer cells, now GFP-expressing are introduced into a mouse or other experimental animals; typically resulting in the formation of primary and metastatic tumours. When exposed to the required wavelength of light these tumours and cancer cells will fluoresce; making them easy to track and study. In certain circumstances tumours can be examined in the intact, live animal. There are additional applications and uses for GFP not mentioned within this. GFP has a multitude of properties that facilitate new areas of research and  investigation across a variety of scientific fields. GFP sits among other fluorescent proteins isolated from other organisms, including coral and sea anemones that are also very useful. When guiding students through use of GFP, you may task students with researching other applications of GFP and similar fluorescent proteins. Getting students to use GFP in the lab, and allowing them to explore broader concepts around the usefulness of fluorescent proteins will increase students’ understanding of this protein and emphasise the vast impact they have had on the study of biology.